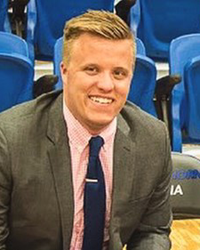 Ian Gilliam joined the GCAA as the Director of Communications in May of 2019.

Originally from Chicago, Illinois, Gilliam studied at Trinity International University in Deerfield, Ill.. Gilliam finished a bachelor’s degree in communication and media studies at Trinity in May of 2017. During his years as a student, Gilliam played first base for three seasons on the Trinity baseball team. He has extensive experience doing play-by-play radio coverage of TIU football, volleyball, soccer, basketball, baseball and softball.

In addition, Gilliam has worked for NBC Sports Chicago, assisting with White Sox coverage as well as working with editors and producers during his time at NBCSN.

Upon graduation Gilliam was named Sports Information Director at his alma mater Trinity International in August of 2017. As SID, Gilliam oversaw all website, social media, statistical coverage, and game management at TIU.