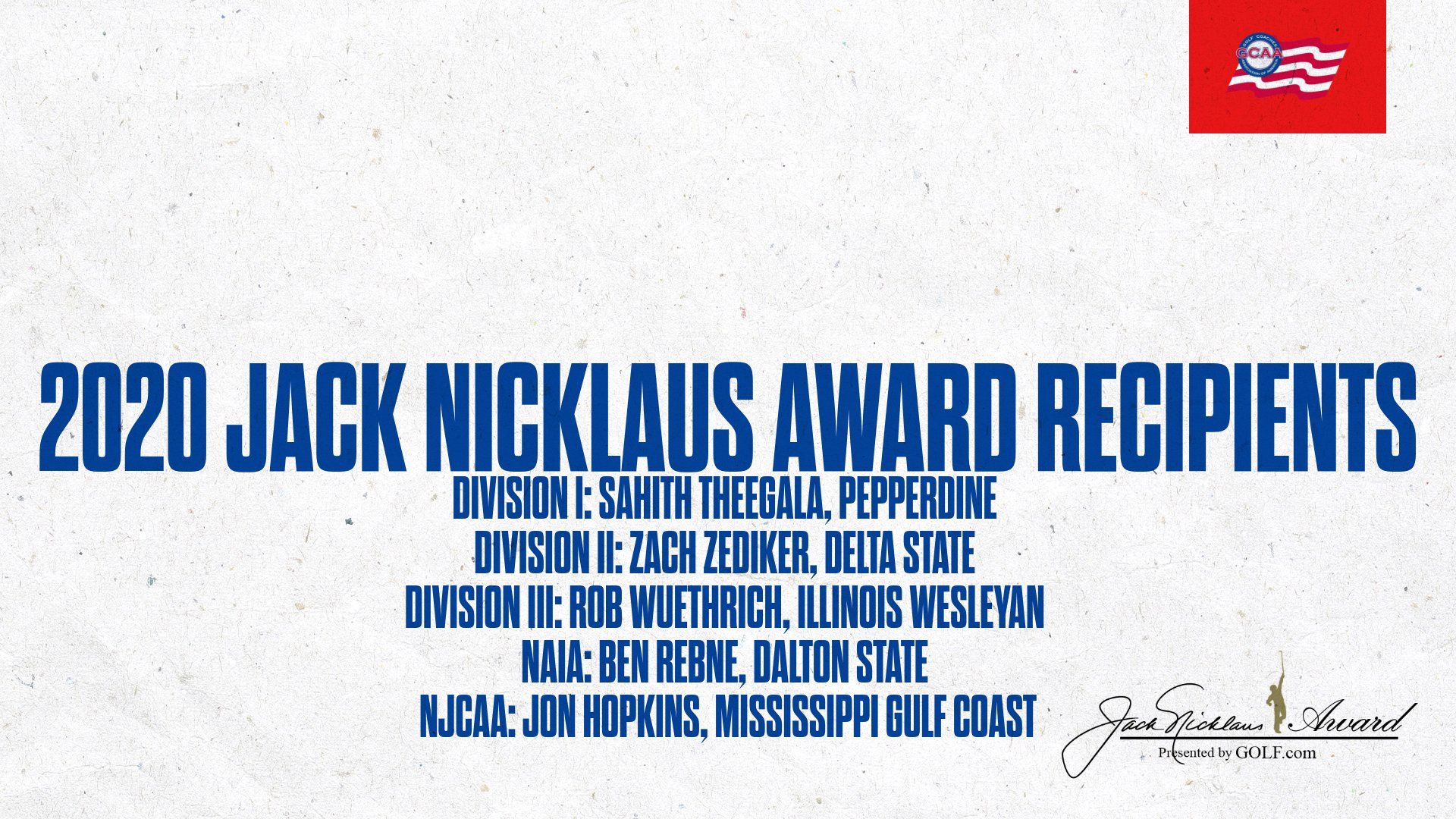 NORMAN, Okla. — Sahith Theegala of Pepperdine, Delta State’s Zach Zediker, Rob Wuethrich of Illinois Wesleyan, Dalton State’s Ben Rebne, and Jon Hopkins of Mississippi Gulf Coast have been named the 2020 recipients of the Jack Nicklaus Player of the Year Award presented by Golf.com. The Nicklaus Award recognizes the top players at the Division I, II, III, NAIA, and NJCAA levels.

Division I: Theegala won a pair of tournaments, claiming victories at the Southwest Invitational and the Alister Mackenzie Invitational. The Chino Hills, Calif., native also posted four top-10 finishes and finished inside the top-20 in all eight events. The senior finished the season with a 69.04 scoring average over 24 rounds played and was named a PING First Team All-American. He is the first winner of the Jack Nicklaus Award from Pepperdine.

Division II: Zediker claimed four victories during his senior campaign and finished with a 67.83 stroke average. The Panama City, Fla., native opened the season with a runner up finish at the Cougar Invitational, before rattling off four straight victories. Zediker was named a PING First Team All-American and is the first winner of the Jack Nicklaus Award from Delta State. Additionally, Zediker claimed the Golfstat Cup, awarded to the college golfer with the lowest adjusted scoring average in the nation.

Division III: Wuethrich posted a scoring average of 70.2 and finished the year ranked No. 1 in the final Golfstat NCAA Division III rankings. The PING First Team All-American honoree had four victories, with wins coming at the CCIW Preview, Gordin Collegiate Classic, Golfweek Fall Preview, and the Tim Kopka Memorial Tournament. Wuethrich did not finish outside the top-six this season and is the first Jack Nicklaus Award winner from Illinois Wesleyan.

Nicklaus, a Big Ten and NCAA Champion at The Ohio State University, helped inspire and create the Jack Nicklaus Award in 1988 and it is now presented to the National Player of the year in NCAA Divisions I, II and III, as well as NAIA and NJCAA.