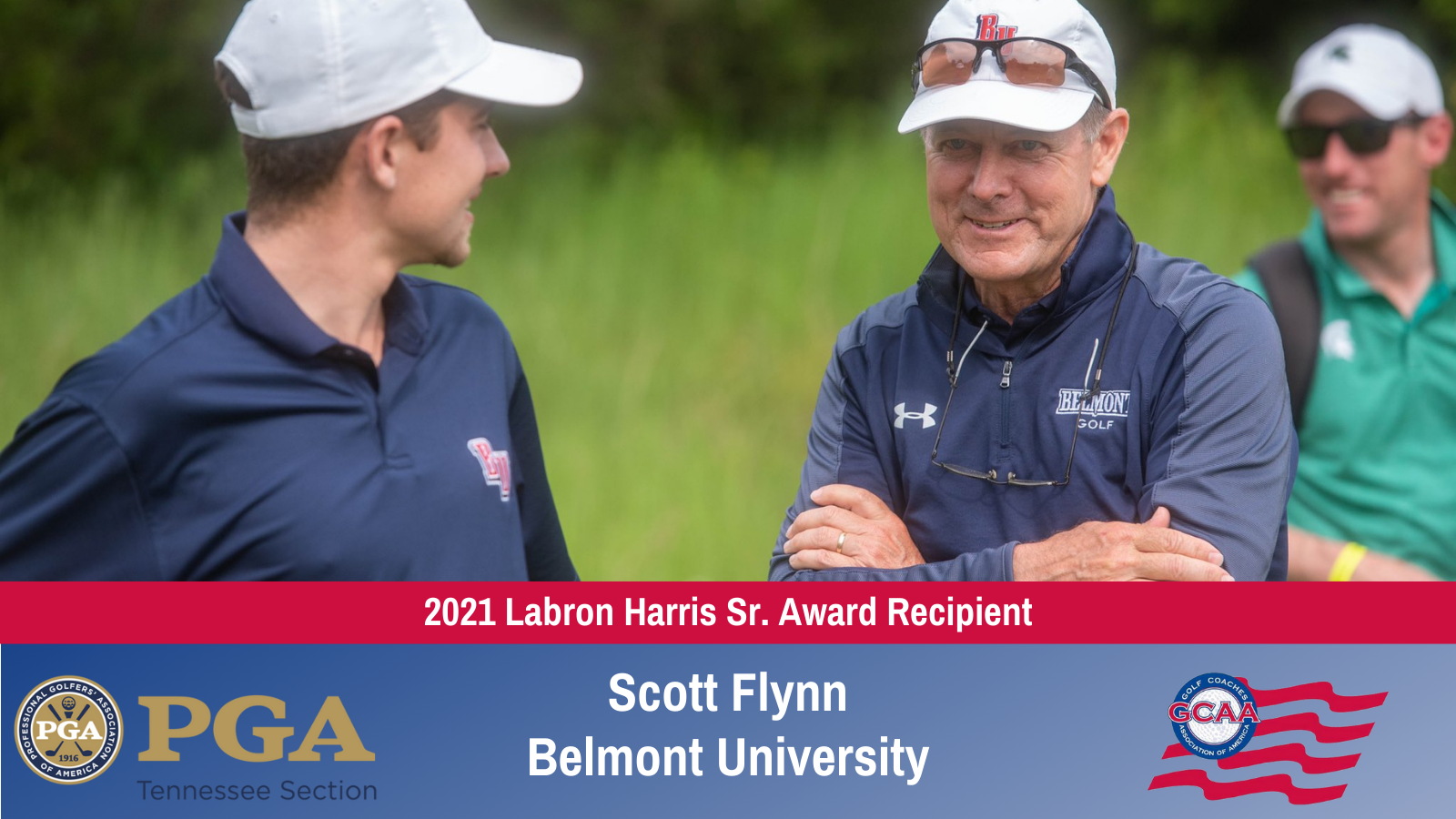 NORMAN, Okla. – Scott Flynn, Head Men's Golf Coach at Belmont University and a member of the Tennessee PGA Section, was named the winner of the 2021 Labron Harris Sr. Award presented by the Golf Coaches Association of America in cooperation with The PGA of America. The Harris Award is presented to the college or high school coach and Class A PGA Professional whose support of the game through teaching, coaching and involvement in the community has helped ensure the continued growth of the game of golf and who represents the finest qualities the game has to offer.

“I’m sincerely humbled and grateful to receive this year’s Labron Harris Sr. Award”, Flynn said. “Coach Harris set a great example for all of us with respect to both his college coaching accomplishments and contributions to the game of golf. My thanks to the GCAA committee and the PGA for even being considered and I’ll do my best to live up to the high standards set by Coach Harris.”

Flynn is in his 14th year leading the Bruins, and his program has seen increasing success both on and off the course. He has had two NCAA Championship Qualifiers, two Ohio Valley Conference Golfer of the Year winners, two OVC Freshman of the Years and nine different players earn All-OVC honors. In addition, his teams have won nine team titles and finished among the top-five at the OVC Championship six times, including a second-place finish in 2021.

Off the course, Belmont has thrived behind Flynn’s lead, earning GCAA All-Academic Team honors in 13 consecutive years, 15 GCAA All-American Scholars, and a GCAA President’s Special Recognition Award three times. 50 of Flynn’s athletes have been named to the OVC Commissioner’s Honor Roll, 30 as ASUN All-Academic members, two on CoSIDA All-Academic teams, one OVC Institutional Sportsmanship Award winner, one OVC Academic Medal of Honor recipient, one Belmont Student-Athlete of the Year and one Belmont Presidential Scholar Athlete of the Year winner.

Flynn came to Belmont with over three decades of experience in playing, teaching and promoting the game of golf. He is a Class A member of the Tennessee PGA Section and has worked extensively with numerous elite players at both the collegiate and professional levels.

When he was the Head Men's Golf Coach at Cal State Fullerton, Flynn was one of the first to fully integrate a resident sports and performance psychologist into their program, along with a comprehensive approach to strength and conditioning. He has participated in numerous national coaching and teaching seminars and has been a featured speaker at a number of golf industry and association events.

In addition to his teaching and coaching duties, Flynn has also served in senior leadership capacities at some of the country's premier golf and resort properties. Concurrent with his position as president of one of the country's leading golf management and development firms, Flynn directed the operations of a full service sports marketing and event management division responsible for the creation and execution of numerous major televised golf events including a number in association with the PGA Tour. He has served on numerous golf industry boards and has been the Chairman of the Southern California PGA Education Committee. Flynn has also taken a hands-on leadership and coaching role in a number of youth golf and life skills development programs including The First Tee.

In addition to his role at Belmont, Flynn also works as Director of Golf at the Golf House Tennessee Learning Center in Franklin, Tennessee.