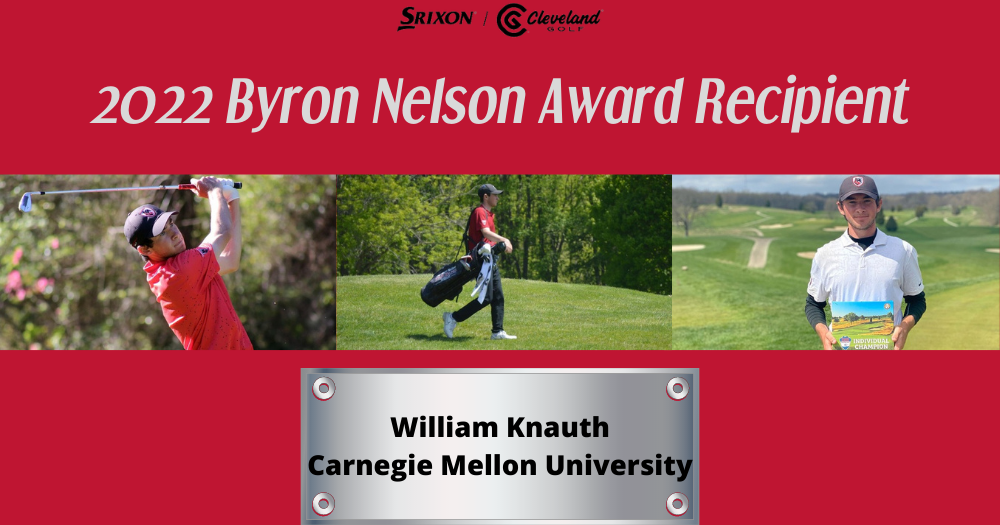 The recipient, a graduating senior, is recognized for his achievement in the classroom, on the course, and in his community. Particular consideration is given to their good citizenship, as portrayed by Mr. Nelson over the course of his life and golf career.

The Williamsport, Pennsylvania native graduates this month with a dual degree in Physics and Mathematical Sciences, carrying a 3.91 GPA. He has been named Division III Srixon/Cleveland Golf All-America Scholar twice and has campaigned to become an Iron Phi for the LiveLikeLou foundation to support ALS awareness, education, and treatment. He also volunteers his time with The Education Partnership in Pittsburgh, which helps teachers in local schools with supplies and support with STEM education and activities, the Homeless Children’s Education Fund supporting homeless children in Pittsburgh, the First Church in Williamsport, preparing meals for elderly residents, and FreshCheckDay at Carnegie Mellon, an event to raise mental health awareness and support on campus and in the community.

“I would never expect anything like this,” Knauth said about receiving this award. “It’s the greatest honor I could ever be given as a college golfer and, most importantly, as a person.”

Knauth is the second Division III athlete to win the award, joining Washington & Lee’s Nathaniel James (2008). He is also the third non-Division I athlete to receive this honor, as Cyril Bouniol (2011) won while Abilene Christian was a member of Division II.

On the course, Knauth has had a record-setting career for the Tartans in which he has elevated his play each year under Head Coach Dan Rodgers. The 2022 UAA Player of the Year set the Carnegie Mellon program record for lowest individual round with a six-under 65 during the 2021 Golfweek DIII Fall Invitational and tied the school record for the lowest 36-hole tournament score with a 137 (70-67) at the 2022 Division III Showcase.

Nationally, Knauth was a Second-Team PING All-American in 2021, is a 2022 NCAA Division III Jack Nicklaus Award finalist for national player of the year, and is currently ranked first in Division III with an adjusted scoring average of 71.00 through 22 rounds played. He has recorded 16 rounds this season of even-par or under and is competing with the Tartans this week in the 2022 NCAA Division III Championships at Mission Inn Resort & Club in Howey-in-the-Hills, Florida.

“Will has worked extremely hard for everything he’s gotten, and I think that he deserves this,” said Rodgers. “He has matured as a young man into who he is now, exemplifying what Byron Nelson meant through his character, sportsmanship, and play.

“I would love to continue the reputation that Mr. Nelson had for treating everyone in the most gentlemanly, respectful, and attentive manner,” he said. “I hope that whoever I come into contact with throughout my life, whether it’s related to golf or not, comes away feeling happy that they met me and that I touched their life in some way. That’s what gives me the greatest satisfaction that I could ever get out of my life. If you do those things and keep your head down, good things will come, and I think that that should be a message that’s broadcasted out there.”

Rodgers talks highly of Knauth’s on-course improvements during his time in Pittsburgh.

“The amount of improvement he’s made in the four years he has been with us has been extraordinary,” Rodgers said. “It’s truly unbelievable to me that he’s been able to figure it out the way that he’s figured it out, and if there was anybody I could pick to win this award, it would be him. He means a lot to me.”

As recipient of the Byron Nelson Award presented by Srixon/Cleveland Golf, Knauth will receive an exemption to play in the 2023 AT&T Byron Nelson at TPC Craig Ranch in McKinney, Texas.

About the Byron Nelson Award