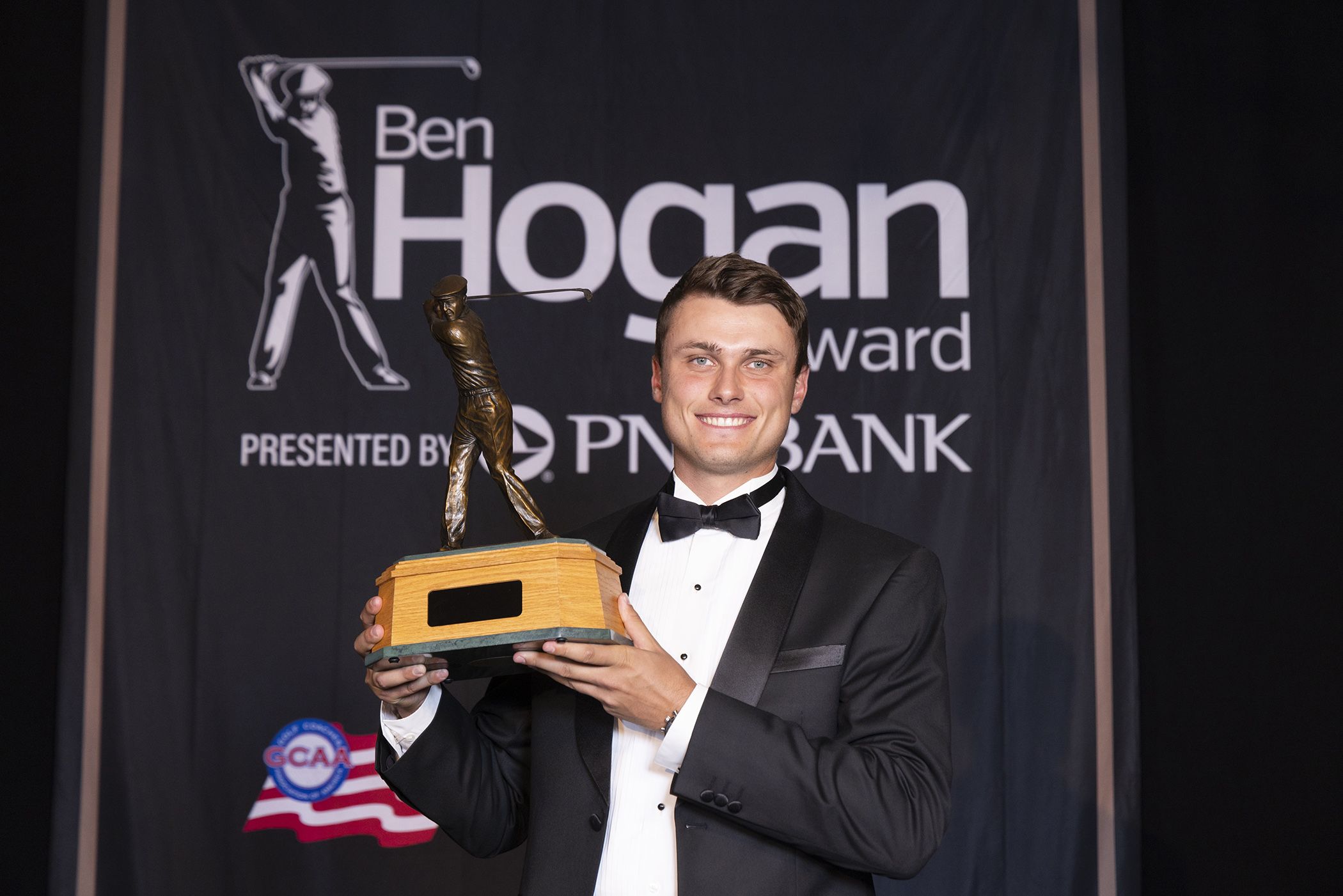 FORT WORTH, Texas (May 23, 2022) – Texas Tech junior Ludvig Aberg has been named the 2022 recipient of the Ben Hogan Award presented by PNC Bank. The annual award – which honors the top men’s college golfer based on collegiate, amateur, and professional events over the previous 12 months – was announced tonight at a black-tie dinner honoring the three Finalists at Colonial Country Club.

Aberg, who hails from Eslov, Sweden, becomes the first-ever winner from Texas Tech and the third recipient from the Big 12 Conference in the past five years, joining Oklahoma State’s Viktor Hovland in 2019 and Texas’ Doug Ghim in 2018. He is the third European ever honored, following Spain’s Jon Rahm and Norway’s Hovland. Upon claiming the award, Aberg was extended the first invitation into the PGA TOUR’s 2023 Charles Schwab Challenge from tournament chairman Jim Whitten.

The runner-up at the 2021 European Amateur, Aberg also placed tied for 30th at the European Tour’s Scandinavian Mixed and shared 51st at the PGA TOUR’s 2021 Butterfield Bermuda Championship. He also has been selected to participate on the International Team at the 2022 Arnold Palmer Cup.

In college play, Aberg has recorded nine straight top-15 finishes, including impressive wins at the Big 12 Championships and The Prestige. He also tied for sixth place at the New Haven NCAA Regional last week. The Red Raider has finished no worse than sixth in his last seven tournaments. He owns a 70.03 scoring average over 11 collegiate events this season.

The Ben Hogan Award presented by PNC Bank annually awards the top men’s NCAA Division I, II or III, NAIA, or NJCAA college golfer based on all collegiate, amateur, and professional events over the previous 12 months. Three of the top six players in the Official World Golf Ranking—No. 2 Rahm (2015, 2016), No. 5 Patrick Cantlay (2012), and No. 6 Hovland (2019)—are past recipients of the honor, while No. 3 Collin Morikawa (2018, 2019) was a two-time Ben Hogan Award Finalist. Morikawa attended as tonight’s special guest speaker.

The group of three Finalists honored Monday night by the Hogan Trophy Award Foundation, Friends of Golf (FOG), and Golf Coaches Association of America (GCAA) included Aberg, Texas A&M’s Sam Bennett, and Oklahoma State’s Eugenio Chacarra. Aberg was voted the winner by an esteemed selection committee made up of nearly three dozen leaders and experts in college, amateur, and professional golf. In addition, all past award winners were eligible to vote in the final round, casting a ballot to rank the three Finalists.

The Ben Hogan Award presented by PNC Bank began honoring the outstanding amateur collegiate golfer at Colonial Country Club in 2002. Prior to its move to Fort Worth, the original Ben Hogan Trophy, which utilized a different set of criteria for its winner, was issued by FOG at Bel-Air Country Club in Los Angeles beginning in 1990.

Since 2002, the Hogan Trophy Award Foundation has awarded more than $875,000 in scholarships to more than 30 universities and charitable organizations. In addition to making donations to scholarship programs at the Finalists’ universities, the Foundation is making a $10,000 donation to honor and assist the University of the Southwest, which experienced a profound tragedy within its men’s and women’s golf programs this spring.

PNC Bank, National Association, is a member of The PNC Financial Services Group, Inc. (NYSE: PNC). PNC is one of the largest diversified financial services institutions in the United States, organized around its customers and communities for strong relationships and local delivery of retail and business banking including a full range of lending products; specialized services for corporations and government entities, including corporate banking, real estate finance and asset-based lending; wealth management and asset management. For information about PNC, visit www.pnc.com.