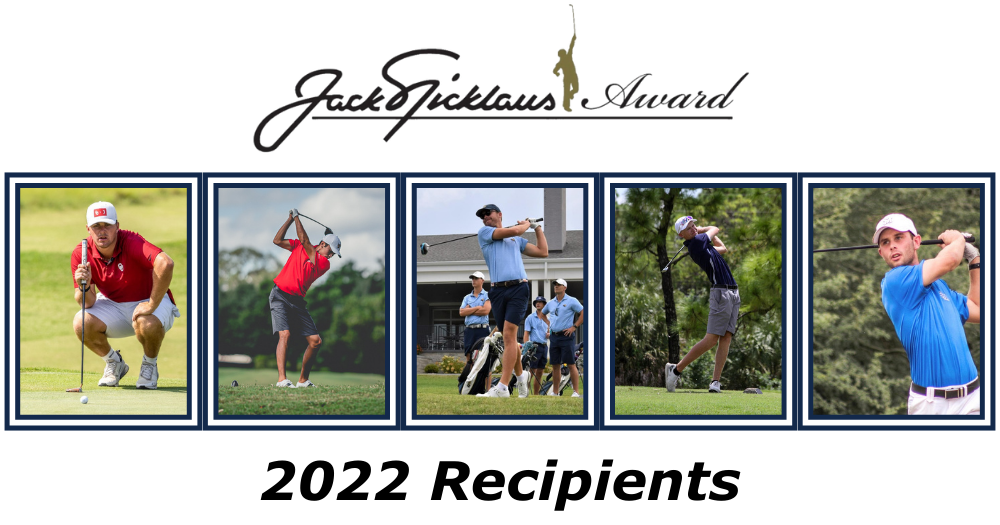 DUBLIN, Ohio — Chris Gotterup of Oklahoma, AJ Ewart of Barry, Will Hocker of Webster, Jakob Stavang Stubhaug of Keiser, and Cecil Belisle of South Mountain have been named the recipients of the 2022 Jack Nicklaus Award. The Nicklaus Award recognizes the top players at the Division I, II, III, NAIA, and NJCAA levels.

“I am always impressed with the quality of golf these young men play, but when I meet them, I am even more impressed with the quality of people they are,” Nicklaus said. “If you look up and down the leaderboards on the PGA TOUR, you will see a number of Nicklaus Award recipients who are now stars at the next level—from Division I representatives like our last three Memorial Tournament winners, Patrick Cantlay and Jon Rahm; Justin Thomas, who just won the PGA Championship; and last week’s winner at Colonial, Sam Burns; to 2010 junior college recipient Abraham Ancer. It’s always a highlight for me each Memorial Tournament to celebrate the accomplishments of these future stars in golf and life.”

Division I: Gotterup, who transferred to Oklahoma from Rutgers for his final collegiate season, was named a PING First Team All-American and All-Central Region selection. He ended the season ranked No. 1 in both Golfstat and Golfweek’s individual rankings while compiling 10 top-10 finishes this season. His 69.77 scoring average and -1.90 score vs. par in 2021-22 were both third-best in program history.

Division II: Ewart won seven tournaments this season, including a stretch of four straight and five of his last six regular-season events. His seven victories tied a single-season school record and made him the fastest Buccaneer to reach 10 career wins. The Sunshine State Conference Golfer of the Year ended 2021-22 ranked first by Golfstat in Division II with a 69.77 adjusted scoring average.

Nicklaus, a Big Ten and NCAA Champion at The Ohio State University, helped inspire and create the Jack Nicklaus Award in 1988, and it is now presented to the National Player of the Year in NCAA Divisions I, II, and III, as well as NAIA and NJCAA.