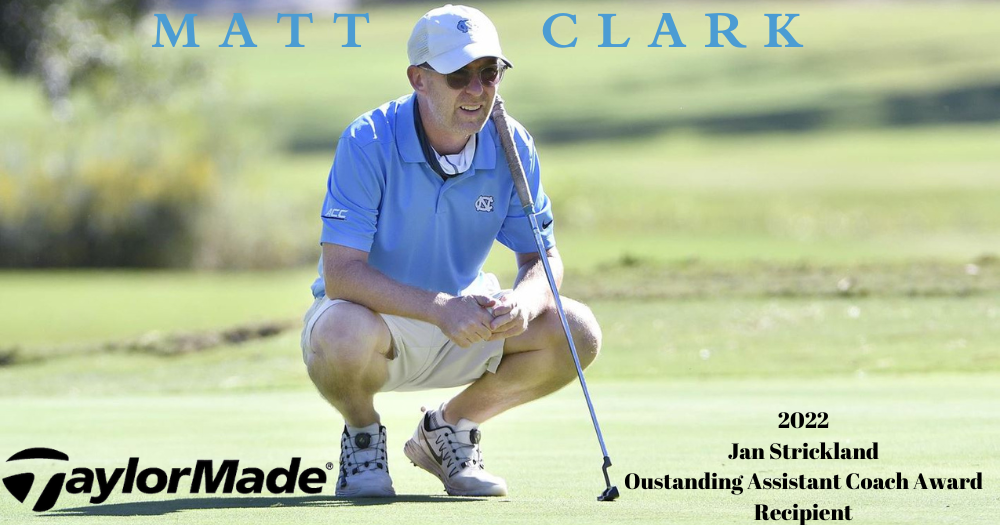 NORMAN, Okla. — North Carolina’s Matt Clark has been named the recipient of the 2022 Jan Strickland Outstanding Assistant Coach Award presented by TaylorMade Golf Company. The Strickland Award is presented to the NCAA Division I, II, III, NAIA, or NJCAA assistant coach that, among other things, has excelled in working with their student-athletes both on the course and in the classroom.

North Carolina won three tournaments, including its first two tournaments of the season for the first time since 1996, and advanced to the NCAA Division I Quarterfinals for the second-straight season in 2021-22 under the direction of head coach Andrew DiBitetto, the 2016 Jan Strickland Award winner, and Clark.

“To be recognized with so many other amazing coaches that were nominated is truly an honor,” Clark said. “I am grateful and humbled the committee, led by Coach Harrington, has selected me as the 2022 Jan Strickland Outstanding Assistant Coach.”

Clark, the Plattville, Alabama, native is entering his sixth season in Chapel Hill, his first as associate head coach. During his tenure, the Tar Heels have posted four top-20 finishes at the NCAA Championships, along with a No. 13 final ranking in the pandemic-shortened 2019-20 season, won 10 tournaments, and excelled in the classroom. Clark has coached 10 PING All-Americans, six Srixon/Cleveland Golf All-America Scholars, and two ACC Freshman of the Year honorees while at North Carolina.

The ACC honored DiBitetto as the 2022 ACC Coach of the Year, an award DiBitetto shares with Clark.

“Coach Clark brings passion, competitiveness, and joy to our program every day,” DiBitetto said. “He’s incredible at building relationships, understanding people, holding everyone to an exceptionally high standard and inspiring them to be their very best.”

Dibitetto added that "this award means even more because it is voted on by golf coaches around the country." “It is a great honor for your peers to recognize the work you have done and I am so grateful the committee has properly recognized what Coach Clark brings to not just Carolina Golf, but college golf in general.”

“This award is a testament to the trust and belief Coach DiBitetto has in me and my abilities as a coach, as well as the willingness of our players to allow me to run alongside them as they chase their dreams on and off the course,” said Clark. “I am fortunate to call myself a coach and appreciate the journey the players have taken me on during my 25 years as a coach. I look forward to the experiences that will come my way in the future.”

TaylorMade Golf Company has sponsored the Jan Strickland Outstanding Assistant Coach Award since its inception in 2003.