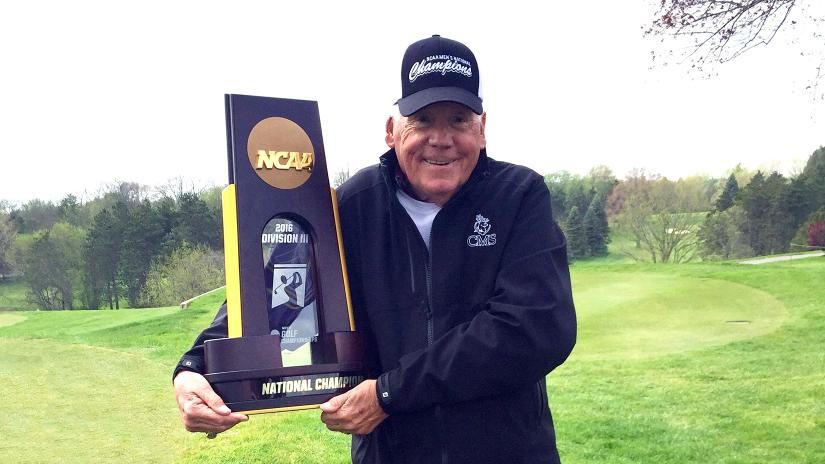 Former longtime CMS men’s golf Coach Raymond “Bim” Jollymour, who in 2016 led the Stags to their first NCAA Division III national championship in program history, died on September 23. He was 85.

A beloved member of the CMS athletic department, and fixture of the CMC campus community, Jollymour served as the Stags head coach for 19 seasons, from 2002 to 2020.

Jollymour was a widely respected leader, who earned the Dave Williams Award as the NCAA Division III National Coach of the Year in 2016. Twice, he coached individuals to national championships, with Tain Lee ’12 winning the title in 2010 and Brad Shigezawa ’14 in 2013. Throughout his illustrious career, he coached seven All-Americans, 29 All-American Scholars, and six individual SCIAC Champions.

In his final season before retiring in 2020, Jollymour was again named one of the five finalists for the Dave Williams Award, after leading the Stags to three wins in four events before the suspension of spring sports due to the COVID pandemic.

Even after retiring, he remained close to both CMS golf programs, serving as an assistant coach for the Athenas—helping them earn a ninth-place finish at the NCAA Championships in 2021. He also remained a close advisor to Stags head coach Mitchell Fedorka. Read more here to learn about Jollymour’s coaching career.

Jollymour is survived by his wife, Marj, both ardent fans of all of the Stag and Athena teams and ever-present at CMS Athletics events. He was revered by the alumni who played for him, as well as those who got to know him around campus.

“Bim had a profound impact on his players and on all of us who knew him,” said CMC President Hiram Chodosh. “I will miss him; we all will. He will continue to inspire us in how he led both his team and his life. Beyond the championships, titles, and awards, he leaves a legacy of commitment to perseverance and excellence.”