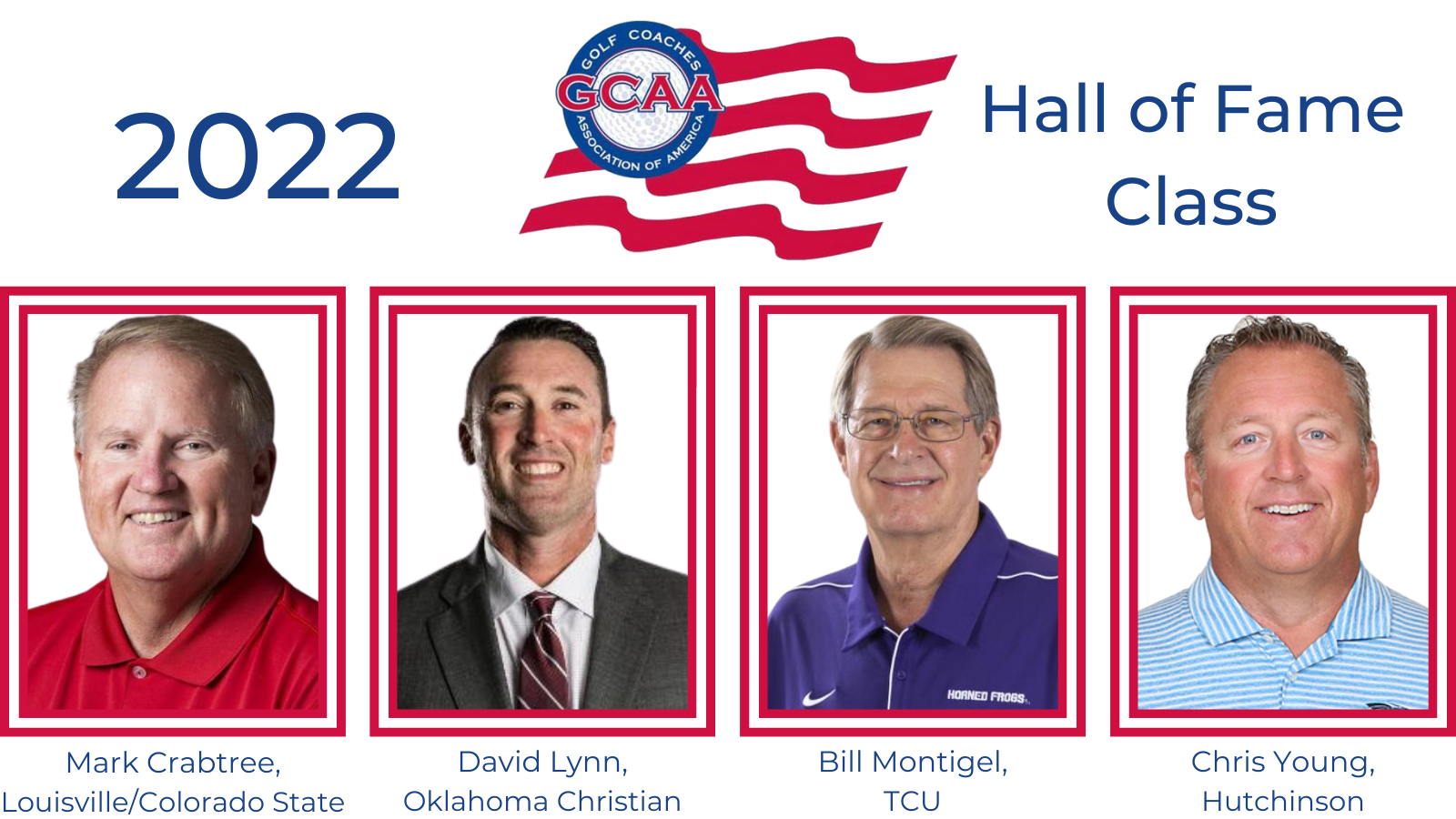 NORMAN, Okla. — The GCAA is pleased to announce its 2022 Hall of Fame class. Mark Crabtree, David Lynn, Bill Montigel, and Chris Young will be officially inducted at the GCAA Hall of Fame Reception and Awards Dinner on Monday, December 5 in Las Vegas.

Crabtree’s coaching career began at Colorado State, where he developed the Ram program from a non-scholarship program into a top-25 team and NCAA Championship contender in his nine seasons. CSU qualified for four consecutive NCAA West Regionals under his guidance and qualified for its first NCAA Championship appearance in 1999. Crabtree then took the helm at Louisville, where he remained until his retirement in 2020. He was the first coach in school history to lead the program into postseason play, appearing in 11 NCAA Regionals and advancing to four NCAA Championships – the last coming in 2019. His 30 tournament wins, which included three BIG EAST titles, and 23 individual medalists, five who were conference champions, are the most in program history. Crabtree, a 2006 Colorado Golf Hall of Fame inductee, won two BIG EAST coach of the year awards and developed five Cardinals who went on to professional playing careers.

Lynn has been a staple in the success of the Oklahoma Christian golf program since 1998 when he started as an assistant coach. He became the Eagles’ head coach before the 1999-2000 season and guided the team until 2008. In 2011, the Eagles capped Lynn’s first season back with the program’s second NAIA national championship and Lynn was named the NAIA Dave Williams National Coach of the Year. In the fall of 2012, he guided OC to the National Christian College Athletic Association national title, a performance that earned Lynn NCCAA national coach of the year honors. OC strung together a run of 16 straight top-four finishes in national-tournament play (either the NAIA or NCCAA Championship), a streak that began in 2000 and lasted through the 2015-16 campaign. Since being eligible for NCAA Division II postseason play in 2016, the Eagles have advanced to five Super Regionals and two national championship appearances. Their runner-up finish in 2022 is the highest finish by an Oklahoma Christian team in any sport in NCAA competition.

Montigel is in his 36th season leading TCU Men’s Golf. He spent eight years as the Horned Frogs’ top men’s basketball recruiter and assistant coach prior to leading the men’s golf program. Since taking the friends for golf, Montigel has provided the blueprint for building one of the nation's top collegiate programs, finishing in the top 20 at the NCAA Championships 13 times. Montigel's tenure has been marked by consistency, highlighted by the program's 31-season streak of NCAA Regional participation. Only Clemson and 2003 GCAA Hall of Fame member Larry Penley had a 31-season regional streak with the same head coach. TCU golf's postseason run is unparalleled in the history of Horned Frogs Athletics, by far the longest streak all-time for any of the school's teams. Montigel is the only coach in any sport to be named coach of the year in four different NCAA Division I conferences.

In his 23rd season, Young continues to raise the bar for the Hutchinson Community College Men’s Golf Team. After winning the program’s first NJCAA team national championship in 2021, Young and the Blue Dragons repeated as national champions in 2022. Ben Partridge was the 2021 NJCAA Division I National Individual Champion, while Harry Crockett and Dominic Clemens were runners-up in 2021 and 2022, respectively. Only the fourth men’s golf head coach in Blue Dragons history, Young oversaw the switch of competition levels from NJCAA Division II to Division I, which came in his first season in 1999-2000. In all, Hutchinson has tallied 21 consecutive NJCAA Tournament appearances, 13 PING All-Americans, 10 Jayhawk Conference titles, 10 NJCAA Tournament top-10 finishes, nine Jayhawk Conference individual champions, and two Phil Mickelson Outstanding Freshman Award recognitions among a plethora of accomplishments.