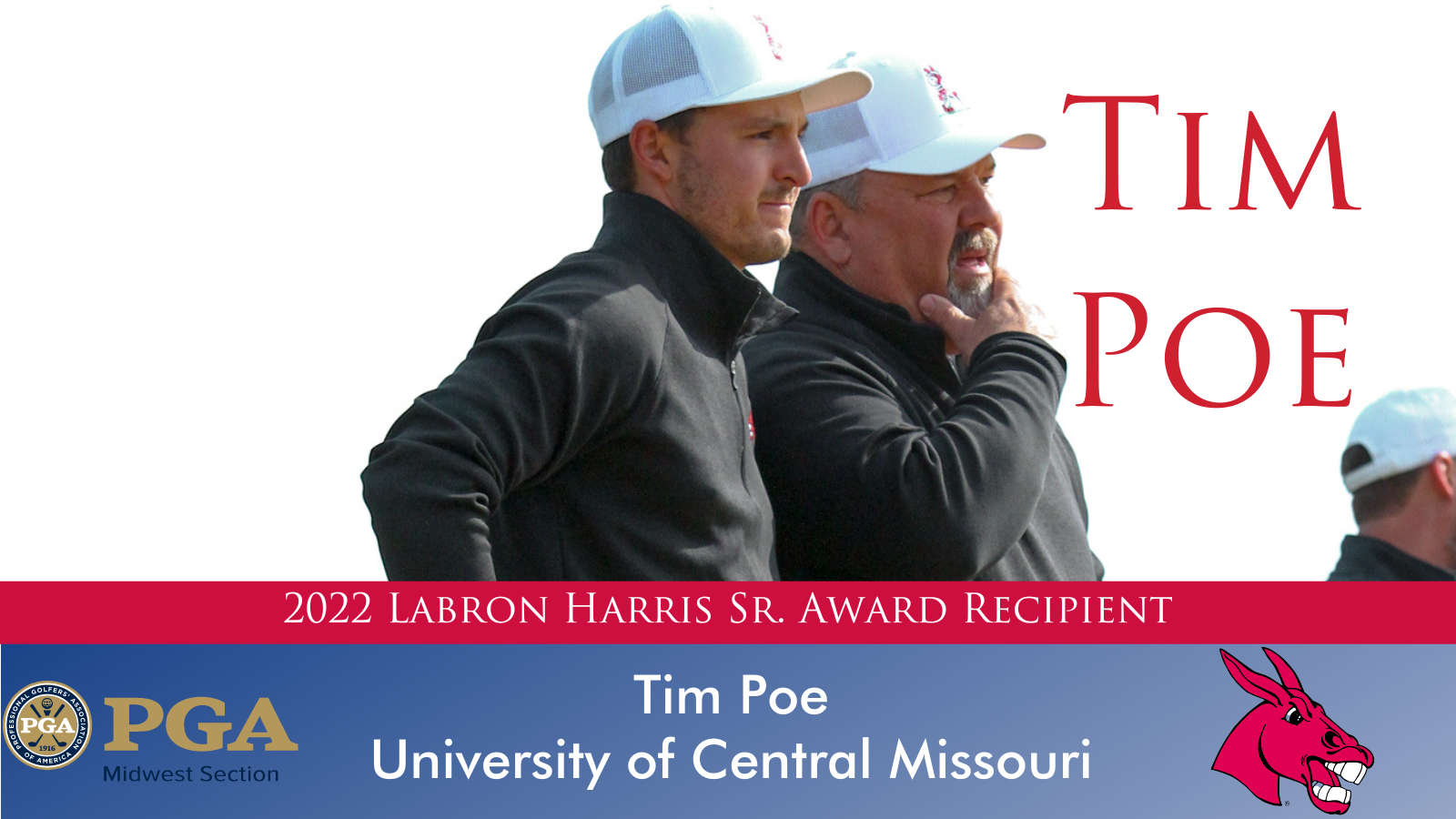 NORMAN, Okla. – Tim Poe, Head Men's Golf Coach at Central Missouri and a member of the Midwest PGA Section, was named the 2022 Labron Harris Sr. Award recipient presented by the Golf Coaches Association of America in cooperation with the PGA of America. The Harris Award is presented to the college or high school coach and Class A PGA Professional whose support of the game through teaching, coaching, and involvement in the community has helped ensure the game of golf's continued growth and who represents the finest qualities the game has to offer.

“Receiving the Lebron Harris Sr. Award is humbling and an honor to be associated with the man that led PGA professionals the opportunity to expand their careers into coaching,” Poe said. “Mr. Harris is truly the benchmark that all PGA and GCAA members strive to become and I attribute his vision to the PGA allowing coaches to earn Class A (A12) accreditation.”

The 2016 GCAA Hall of Fame and 2022 Missouri Sports Hall of Fame member, Poe has received MIAA Coach of the Year honors 14 times and is a 10-time Golf Pride NCAA Division II Regional Coach of the Year recipient. He was the first Division II coach to be named an Arnold Palmer Cup Head Coach when, in 2011 at The Stanwich Club in Greenwich, Conn., he led Team USA to a 13-11 victory over Team Europe.

A Central Missouri graduate, Poe was a team captain during his junior and senior years and a two-time All-MIAA and All-NCAA District 5 selection. As a senior, he qualified for the NCAA Division II National Championships in Columbus, Ga. Following his collegiate career, Poe turned professional and became the assistant golf pro at Keth Memorial Golf Course (now Mules National Golf Club), home to Central Missouri Golf, before being named to the position of head golf professional and men’s head golf coach in the summer of 1990.

Heavily involved in the game off the course, Poe has volunteered much of his time to community efforts such as Tom Watson’s Clubs for Kids, the Johnson County Cancer Society annual golf tournament in Warrensburg, Mo., as a rules official for junior tournaments in the Kansas City area, coaching youth sports teams, and helping originate and coordinate the Men’s & Junior City Golf Championship in Warrensburg. He also owns Top Notch Golf Club Repair in Warrensburg and has been a member of eight different NCAA and GCAA committees.

“I am so proud to be a member of the PGA and the GCAA, both of which have contributed to my development as both a coach and a golf professional,” said Poe. “I would like to thank the GCAA and the PGA for creating this award and the selection committee for putting my name next to so many of the greats.”