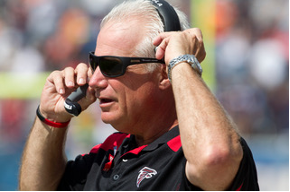 Smith was named head coach of the Falcons in February of 2008 and immediately went about the business of turning around the downtrodden franchise. Smith is the all-time winningest coach (66-46) in franchise history.

Under Smith’s laser-focused leadership, the Falcons enjoyed one of the league's biggest turnarounds in 2008. After a 4-12 mark in 2007, Atlanta finished the 2008 season with an 11-5 record and lost to eventual NFC Champion Arizona in the NFC Wild Card Playoffs. Following his inaugural season, Smith was named NFL Coach of the Year by the Associated Press and The Sporting News NFL Coach of the Year.

Atlanta tallied a 56-24 regular season mark during Smith’s first five seasons, recorded back-to-back winning seasons (2008-2009) for the first time in franchise history, and compiled five consecutive winning seasons (2008-2012), the only team in the NFC to achieve that feat during that time frame. This impressive run also included two NFC South titles, hosting the NFC Championship Game for the first time in franchise history at the Georgia Dome, and two 13-win seasons (2010 & 2012).

Smith, regarded by his peers as one the top defensive coaches in football, helped guide the Baltimore Ravens to victory in Super Bowl XXXV as a defensive assistant coach. He later helped transform the Jacksonville Jaguars into a defensive powerhouse, serving as the club’s defensive coordinator from 2003-2007 when the team finished as one of the NFL’s best in total defense, points allowed, and rushing defense.

In 2015, Smith co-authored with Jon Gordon the Wall Street Journal’s Best Seller book You Win in The Locker Room First. The seven C’s to Build a Winning Team in Business, Sports and Life.

"I am honored to have the opportunity to be present to the members of golf coaches associations,” said Smith. “I am looking forward to discussing the principles that Jon Gordon and I discuss in our Wall Street Journal Bestseller “You Win In The Locker Room First. The 7 C’s to Build a Winning Team in Business, Sports and Life”