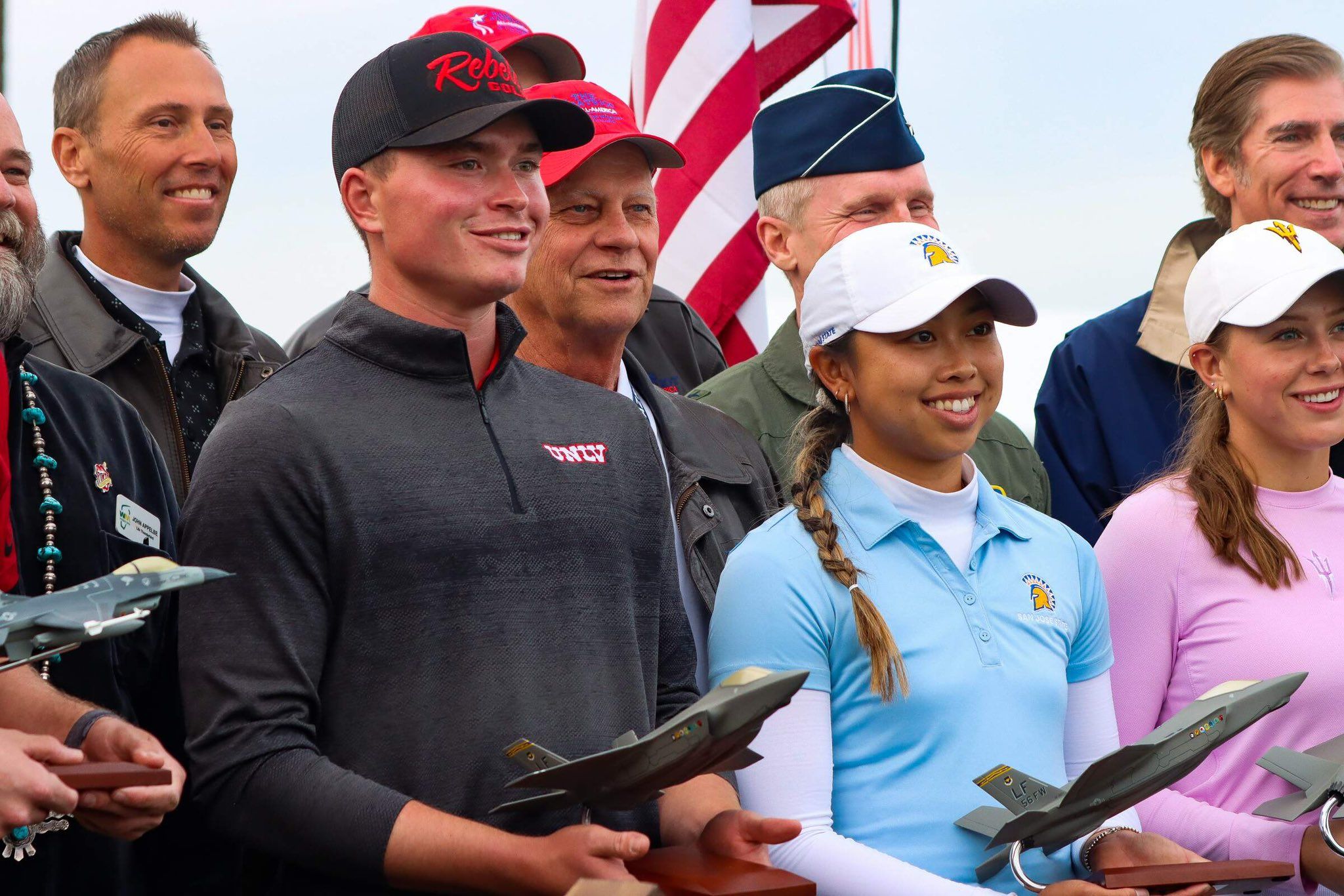 Playing in the second-to-last group, Fioroni birdied five of his last seven holes on the Gold Course, including his last three in a row to tie the Patriot All-America Men’s Division low round with a 63 and take the lead into the clubhouse at -12. University of Oklahoma junior Ben Lorenz needed a birdie on 18 to force a playoff, but the Peoria, Ariz.-native’s putt fell short, setting off celebrations in the raucous 18th hole gallery and a slew of congratulatory high fives for Fioroni. Lorenz finished alone in second at -11, and a four-way tie for third featured 36-hole leader Stephen Campbell, Jr., of Oklahoma University, Gabriel Salvanera of Arizona State University, Herman Sekne of Purdue University and Connor Jones of Colorado State University.

“I have no words right now, honestly I knew I was really behind today and this is the first time I never thought about my score,” said Fioroni, an All-Mountain West selection from San Diego, Calif. “I knew I needed to make as many birdies as I could. I was so much in the zone I didn’t realize until after the round that I shot 8-under. I’m kind of in shock right now – I don’t know what to say.”

Malate finished 54 holes of play tied for the lead with Arizona State University’s Grace Summerhays and Emma McMyler of Xavier University at -9 overall. The 36-hole leader Summerhays would be eliminated from the playoff after a par on the first hole (hole 18 of the Blue Course) fell short of the birdies made by Malate and McMyler. The duo would each birdie the next two playoff holes (both hole 18) before each reaching the 18th green in two on the fourth extra hole. McMyler just missed her 25-foot putt, while Malate buried her left-to-right 20-footer for eagle and the F-35 Lightning II Patriot All-America trophy.

“This is one of my bigger collegiate wins so I’m excited,” said Malate, a San Jose State University President’s Scholar from Seaside, Calif. “[Emma] played really well and made a lot of great putts. She made it hard for me, so I had to make an eagle to win.”

At Sterling Grove Golf + Country Club, Aurilia and Joseph Lloyd of Fresno State shot the same score for the third straight round, both firing 68-66-69 to finish the 54-hole event at -13 overall, three shots ahead of Aurilia’s Arizona teammate Calvin McCoy. On the second playoff hole, Aurilia made a 20-foot birdie putt to put the pressure on Lloyd. On the opposite side of the green, Lloyd’s 18-footer lipped out, leaving the Scottsdale native with his hands on his hips in disbelief. First round leader Andi Xu of the University of San Diego finished fourth at -8 overall, two shots better than two players at -6.“It feels good – I played really well all week,” said Aurilia, an Arcadia High School grad in nearby Phoenix. “This is the first time they’ve had this event, and it’s a really good event. It’s for a really cool cause, also, so it was a great tournament for me.”

The highlight of the day came on the Blue Course, where Lilly Thomas of the University of Tulsa made a hole-in-one on the 9th hole, using an 8-iron from 143 yards to find the bottom of the cup.

The Patriot All-America honors fallen or severely wounded soldiers in partnership with the Folds of Honor Foundation. The golfers receive a golf bag donated by PING Corporation at the event’s opening ceremony emblazoned with the name and branch of service of a fallen or injured military member whom they shall represent. Participants also receive a card with the soldier’s story so they can be familiar with that soldier, giving many of the top players a unique perspective not only on golf, but on life. At the conclusion of the tournament, the golf bags are shipped to players’ schools and auctioned with all proceeds benefitting the Folds of Honor Foundation.

Named after the Air Force P-47 Thunderbolt, The Thunderbolt has been added to the tournament week schedule to accommodate players who met the initial eligibility but did not make it into The Patriot. The Thunderbolt consists of players who are ranked in the top 1000 in the World Amateur Golf Rankings (WAGR), are PING Second, Third and Honorable Mention All-Americans from Divisions II, III, NAIA, and NJCAA, or are AJGA Second Team and Honorable Mention All-Americans.

About The Patriot All-America Invitational
Featuring golf’s stars of tomorrow, The Patriot All-America is regarded as a top amateur event nationally, attracting PING All-America golfers from all three NCAA Divisions, NAIA and NJCAA rankings as well as from universities outside the United States.  The Arizona Golf Association (AGA), JDM Partners and the Golf Coaches Association of America (GCAA) partnering with the Folds of Honor Foundation to host the tournament. For more information visit patriotallamerica.com.

About Wigwam Golf Club
The Wigwam’s three 18-hole championship golf courses offer a diversity that cannot be matched by any other Arizona resort, with 54 holes of championship golf including two courses designed by the legendary Robert Trent Jones, Sr. The Gold Course has hosted many signature tournaments over the years, including numerous U.S. Open Qualifiers, U.S. Amateur Qualifiers, several NCAA Regional Championships and the annual Patriot All-America Invitational, one of the top amateur competitions in the world. The 7,430 yard, par 72 track has also received various industry awards and accolades since opening in 1965, including being named one of the “Top 100 Golf Courses in America.” In December 2009, The Wigwam (including the golf courses and resort property) was purchased by JDM Partners, led by sports icon Jerry Colangelo. For more information, please visit www.wigwamgolf.com.

About Golf Coaches Association of America
Established in 1958, the Golf Coaches Association of America (GCAA) is the professional organization of golf coaches. The GCAA's mission is to support its member coaches by creating educational opportunities, providing resources, and promoting its members with the purpose of enhancing their overall performance as coaches, mentors, and teachers. The GCAA also recognizes the excellence and achievements of its members and their student-athletes in academic, athletic and civic endeavors.